Exploring music throughout the medieval period

Jonathan Weeks is a collector, occasional instrument maker, and player of medieval music. 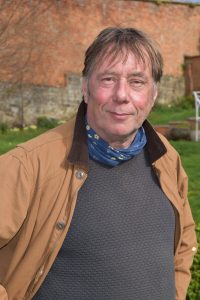 He developed an interest in the subject while still at school as a result of participating in a performance of “The Taming of the Shrew” which involved the use of period instruments, and the pioneering work of David Munrow. He brought back many of the instruments from obscurity during the late 1960’s and early 70’s and introduced them to the public through his media work and many recordings.

Jonathan went on to study Archaeology at Reading University where an interest in the Medieval prevailed and, through the observation of iconography, sculpture and manuscript illustration, he became fascinated with the musical instruments of that period.

During the mid seventies he began putting together a collection of modern replicas of the instruments, beginning with crumhorns and shawms.

After university he returned to work as a tenant farmer on the family farm in Buckinghamshire. This was taken from them in 1988 and after a few years of odd jobbing moved to Somerset in 1992. Here he began collecting again and started giving talks and demonstrations which proved very popular with all sorts of groups and societies in the West Country and beyond.

He now has a collection of over 40 instruments which include the following : reedpipes, shawms, bagpipes, double pipes, 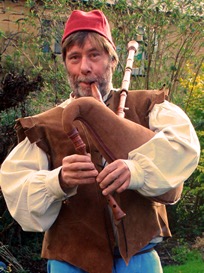 These are presented as two lectures, usually entitled “ A Blast from the Past pt 1, Medieval woodwind” and pt 2 the Horns and Strings. The talks are always delivered without notes and in a very lively and amusing fashion. The talk can be further boosted with copious digital images of the instruments in their Medieval context.

During the talks Jonathan plays a tune on each instrument ( with varying degrees of proficiency) . He has been giving the talks for at least 25 years, and on at least 2000 occasions!