Exploring music throughout the medieval period

I would like to introduce a few of the Medieval music instruments that you will encounter during my presentations. 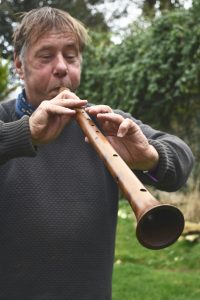 An instrument supposedly invented in Iraq during the Dark Ages although the name comes from the Latin for a reed. It is a double reed instrument that is the ancestor to the modern oboe, although it is much louder. It is said that it first came to our attention in the West during the crusades of the late 11c when its screaming tone made a great impression on our knights. It is very much an outdoor instrument and its piercing brilliance is very much the sound of the Medieval city. It is still heard in the Arab World, China, and parts of Spain and France.

It may surprise some people that the Scots have no more claim to the bagpipe than any other country in the Old World. It is a very ancient instrument that probably began life in the Middle East in prehistory when a shepherd boy decided to combine one of his reedpipes with one of his dead sheep.
The Romans called it a “utricularius’ and the Emperor Nero is the first named bagpipe player in history. The Middle Ages added the drone, and the instrument became widespread in Court, Church and countryside. Edward 1 employed dozens of bagpipes in his court.
By the end of the Middle Ages the bagpipe began to decline to the countryside and eventually it died out in most of England, France and Germany. However of all the Medieval music instruments it is the most widely heard in the World today. 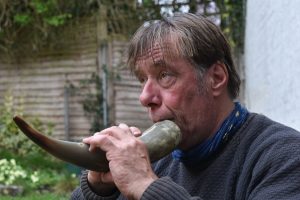 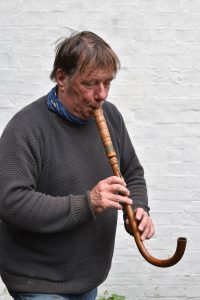 The hornpipe (left) is first mentioned by Chaucer in the late 14c, but it is probably much older. It is a reed instrument where the reed is covered by a section of horn thereby protecting it and also allowing the playing to tongue the notes. It has a long and strong tradition in Wales where it has recently been revived and now appears at Welsh music festivals. There it is called a Pibgorn. The crumhorn is very much the same instrument except that by the end of the Middle Ages it was entirely made of wood, with a wooden cap to protect the reed. 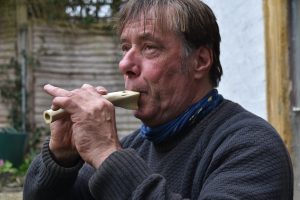 Before WW2 a beautiful deer bone whistle was found in the moat of the White Castle in South Wales which, it is thought, dated to the late 13c. Pieces of bone whistles are frequent discoveries on Medieval excavations, usually made of lamb shanks, or geese leg bones.
Whistles were also made of horn which were blown the opposite way of the hunting horn. These are called Gemshorns and the name survives as an organ stop. Their sound is very much like an ocarina. 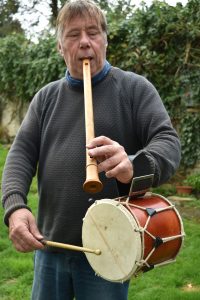 As an accompaniment to Medieval music events nothing could surpass the pipe and tabor. The pipe has three holes upon which one can get 14 consecutive notes by varying one’s breath pressure, which is enough for most dance tunes. This leaves a spare hand to play a small drum or a string drum, or a bell or a triangle. It is ideal for outdoor dancing, and three examples were found on the Mary Rose. 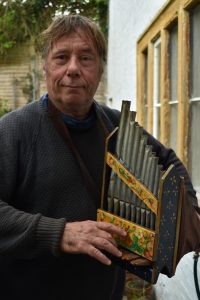 There were two sorts of organ in the Middle Ages, the positive, ie the church organ, and the portable version. This probably emanated from the Arab world as it first appears in Spain in the 12c. The portative is worn round the neck and must be seen as the forerunner of the squeeze box. The bellows are round the back. As the Middle Ages progressed the portative went from diatonic to chromatic, hence gaining many more pipes and getting heavier and heavier.
Eventually it came off the neck became the table organ.

The Symphony is a small box-like hurdy-gurdy that probably began life in the 12c. 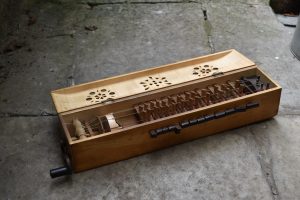 There were three types of the instrument then, a large two man version called an organistrum for use in the major churches instead of the great organs, the veille a rou and the symphony.
Hurdy- gurdy is a much later term, probably from Urdu. They all work the same way, the French call it a wheeled fiddle, which is exactly what it is. The notes are sounded by a wheel rubbing on strings, and the melody provided by wooden keys touching those strings.